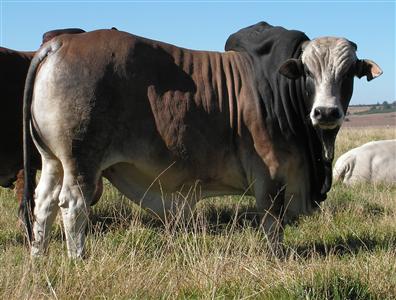 Boran cattle were domesticated in 3 parts of the world: Cattle were introduced into Africa:
Genetic make-up of the Boran

Through DNA sampling Hanotte et al have analyzed the genetic make-up of the Boran and it consists of the following genetic proportions:

The Boran developed in eastern Africa and the main Boran hotspot was the Borana plateau in southern Ethiopia. That was a point where all the different breeds migrated through to their various destinations in Africa.
The Boran developed into the dominate breed of eastern Africa and especially in Kenya, where the Kenyan Boran Cattle Breeders' Society (BCBS) have bred the "Improved Boran" since the turn of the century.
"While the Boran breeders have greatly improved the beef conformation of their animals, they never lost sight of the important qualities of the indigenous Boran" to quote the BCBS.
As far as can be determined this is the only breed in Africa (and therefore the world) to have this specific combination of genes. It must be properly understood that the Boran is a breed that had it's last infusion of "new" genes in 700 AD. The Boran is therefore not a synthetic or compound breed that have been crossbred in the last few decades. It has been bred as a pure breed for 1300 years. The importance of this to the commercial breeder is that the Boran will have much stronger hybrid vigor than modern compound breeds.